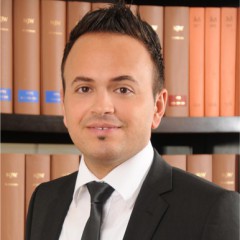 After finishing grammar school in Munich, Mr Özgür Aktas began to study jurisprudence at the LMU in Munich, where he graduated in 2005.

Afterwards, in 2007, he founded the law office “SAS Lawyers”. Later, as a result of the union with his colleagues Dr. Temel Nal and Serdal Altuntas, SANAS Law Office came into being.

Mr Aktas, in his work for our office, mainly puts his focus on general civil law, family law and traffic law.

In fact, he is specialised in family law.

Apart from his fascination for legal practice, Mr Özgür Aktas preserves a vivid interest in politics, cinema and sports.